Antonin Bas About the author

We are delighted to announce the release of P4Runtime v1.0.0. Many thanks to everyone in the P4 API Working Group who contributed to the specification. The v1.0.0 release includes:

What is P4Runtime and why was it created?

The P4 programming language has become a popular way to specify and program the forwarding plane behavior of networking devices. We created the P4Runtime API as a standard way to control a running P4 forwarding element, for example to add and delete entries to a switch’s forwarding tables. Before the release of P4Runtime, most P4 forwarding elements were controlled using custom and proprietary control plane APIs. After all, the P4-language specification declares the control plane API to be out of scope, leaving programmers and vendors to come up with their own solution. This led inevitably to a wide variety of incompatible APIs; control plane applications written for one API are not portable to other systems, even if the underlying forwarding element is defined in open, vendor-independent P4.

P4Runtime attempts to solve this problem by defining a standard, open and silicon-independent (for both programmable and fixed-function devices) API which enables runtime-control of arbitrary P4 forwarding planes.

P4Runtime is equally well-suited to remote control planes and local ones (with or without RPC). The figure below shows what a typical SDN deployment of P4Runtime can look like. In this example, the switch Operating System is Stratum, based on Open Networking Linux (ONL). 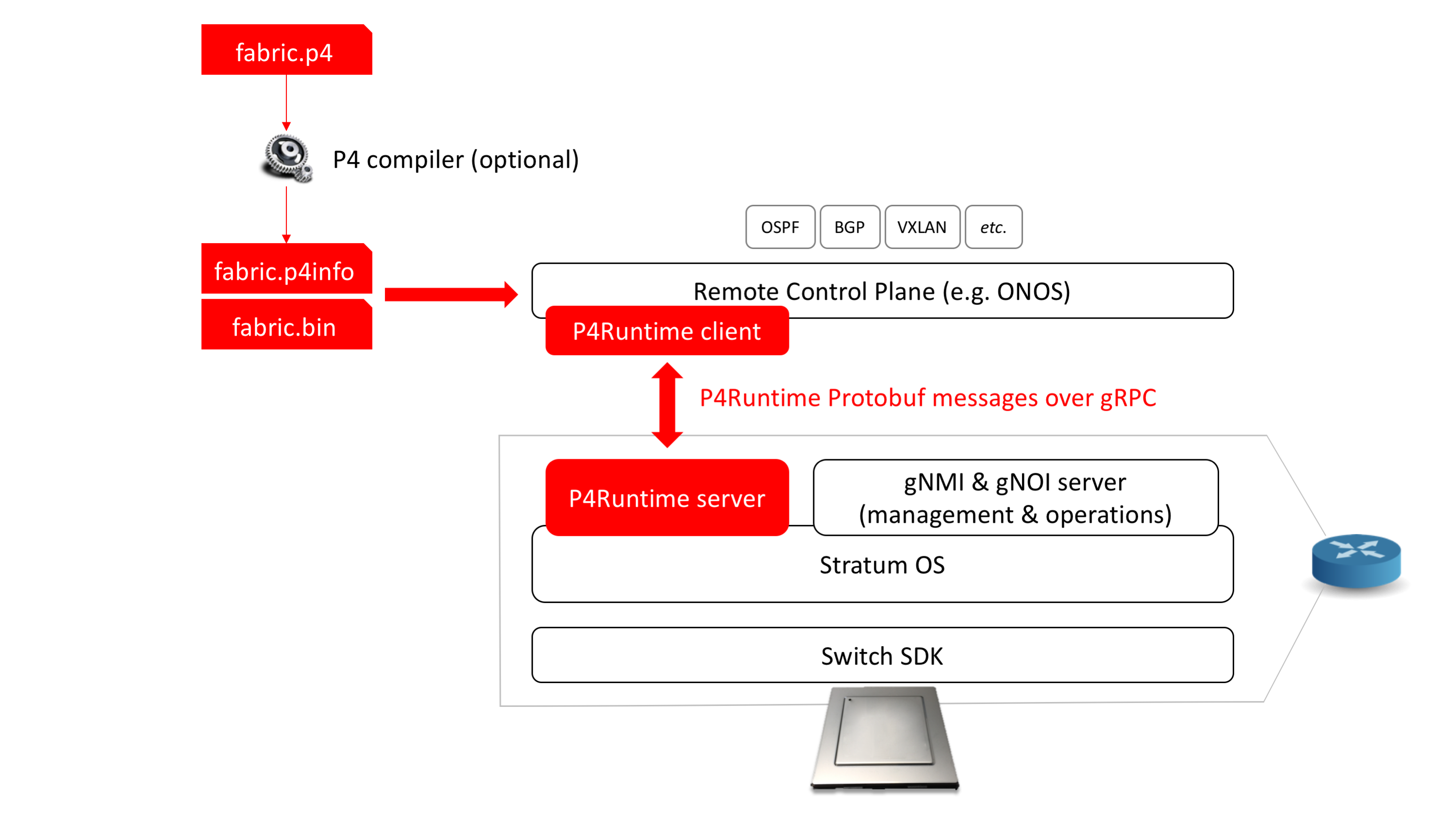 P4Runtime is pipeline-independent: When new features are added to the P4 forwarding plane, the P4Runtime API does not change; there is no need to recompile the control plane software (or even reboot it).

To achieve pipeline-independence, P4Runtime decouples the Protobuf interchange message format from the format of the data carried by these messages, much like gNMI defines a fixed gRPC service and fixed Protobuf message formats which can be used to carry any tree-structured data, often modeled using YANG. In P4Runtime, the data model is itself described by a Protobuf message, called P4Info, which is derived from the P4 program. The interface, on the other hand, is fixed and does not depend on the P4 program, which promotes extensibility (i.e. introduction of new protocols or actions), and streamlines client and server implementations. 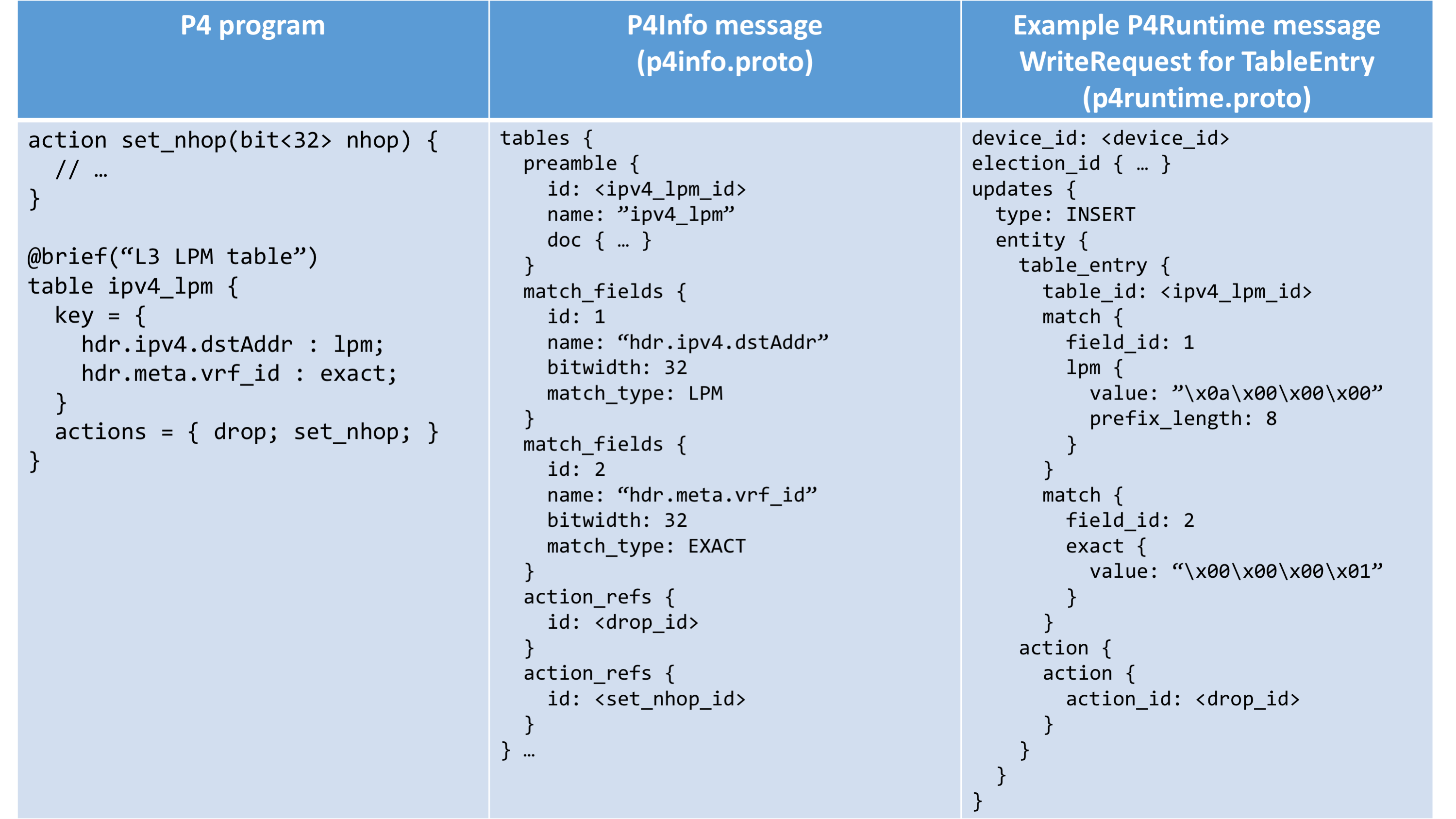 In the table above, the P4Info message (in the middle) is the data model which dictates the contents of the P4Runtime messages (on the right). For example, in this specific case, the P4Info entry for table ipv4_lpm dictates that every match entry added to the table must provide properly formatted values for the 2 match fields (hdr.ipv4.dstAddr and hdr.meta.vrf_id) and must choose from 2 actions (drop or set_nhop).

P4Runtime v1.0.0: the result of a collaboration between many industry professionals

The design of P4Runtime started in mid-2016 and picked up momentum in 2017 with the creation of the P4 API Working Group. Multiple implementations on different platforms were developed in parallel with the design work, and progress was showcased at multiple networking events since 2017 such as:

After two years of design and prototyping work, we are confident that release 1.0.0 of P4Runtime is production-ready. This release comes with strong backward-compatibility guarantees: all releases from now one will be backward-compatible with this one, unless the major version number is bumped up (from 1 to 2). We expect major version bumps to be rare and, following best-practices for cloud APIs versioning from Google, the major version number is encoded in the Protobuf package name to remove the possibility of version mismatch between client and server, as well as enable endpoints to support multiple major versions simultaneously should the need arise.

We pride ourselves in having delivered an unambiguous API, with a comprehensive specification, to facilitate implementation by control plane application writer and silicon vendors, and to guarantee interoperability.

What are some interesting features in P4Runtime?

Can P4Runtime and SAI complement each other?

The difference between SAI and P4Runtime was explained in a previous p4.org blog post. SAI was introduced for local control of switches and, unlike P4Runtime, assumes an underlying forwarding plane running a fixed set of protocols. SAI’s main value proposition is that by exposing a uniform, vendor-independent, semantic API to local control plane applications it makes it easy to integrate with standard protocol stacks such as FRRouting. The tradeoff is that while SAI is simpler to use than P4Runtime, it is less extensible.

We believe that SAI and P4Runtime are very complementary. There has already been good progress in the flexsai project towards using a P4 description of the SAI API to create a strong “contract” between the control plane and the forwarding plane. But flexsai relies on API generation, instead of exposing a pipeline-independent interface to applications, and does not support RPC functionality.

We think the complementary nature of SAI and P4Runtime can be taken further, to introduce the extensibility features of P4Runtime into SAI, and we’d welcome working with others to make this happen. Please let us know if you are interested in contributing to such a project. 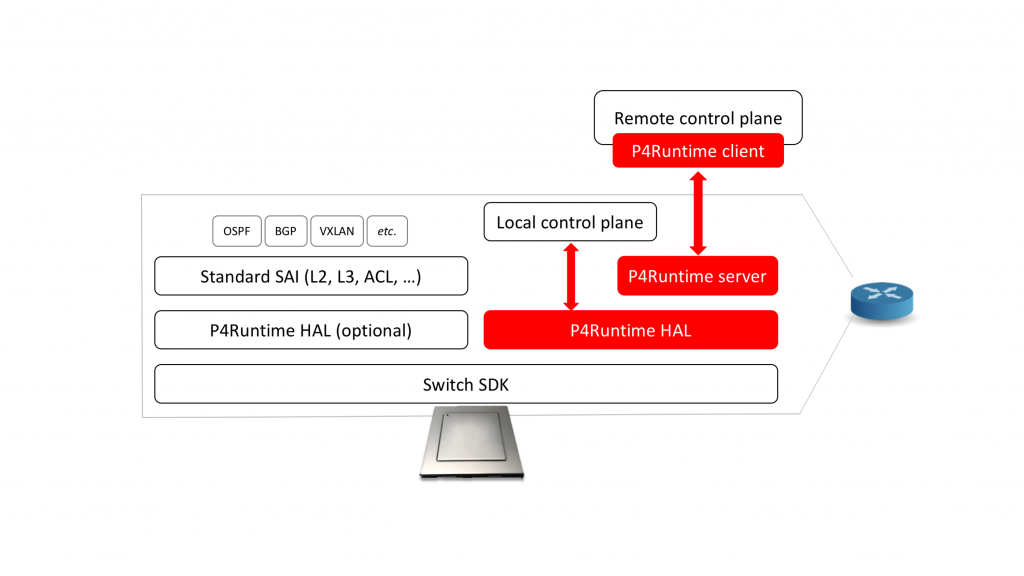