In this community member profile, we would like to introduce David Gengenbach, a PhD. student at the Università della Svizzera italiana and a researcher at SAP, based in Heidelberg, Baden-Württemberg, Germany. He is an active contributor in the Open Networking Foundation’s Stratum community. 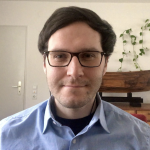 David has been participating in the Stratum community as part of the TST meetings for quite some time and his first contribution was an issue in June 2020. Since then he has been making significant contributions in the form of issues and user-facing documentation. His more recent contributions have been improvements in the testing framework Mininet integration. As one of David’s main interests lies in distributed monitoring and management in SDN, especially in P4-enabled networks, he is currently improving multi-switch testing setups in Stratum.

Whereas David now holds a Masters degree in Computer Science from the Technische Universität Darmstadt, he had no prior experience or education when he started working as a programmer. Programming turned out to be his love of first sight that has only increased since. After four years working for media agencies, he decided to deepen his theoretical knowledge by studying computer science. In his studies he focused on machine learning and got interested in software-defined networking and P4 in particular. While preparing his Master’s thesis, he worked with a proprietary switch management API that had serious documentation problems and was not standardized in any way. After finding Stratum with their approach to community-based and standardized development with strong user focus, David got excited to work with them. Strong user focus not only shows in the detailed tutorials on Stratum (and ONOS) but in the professional documentation as well.

“I am delighted to find such an open community where contributions are so readily discussed, improved, and added to the upstream. Especially the work with the Stratum team and community makes working on the project so interesting and refreshing”, says David.

Aside from programming, David loves relaxing during long walks through the forests. He says that a lot of problems get more clear and concise when detaching them from the everyday fog during his walks.

Talking about special honors, since David is the last of seven children in his family, by German tradition the President of Germany is his honorary godparent (Ehrenpatenschaft).