Xin Jin About the author

Editor’s note: This guest post by Xin Jin (The Johns Hopkins University) describes a next-generation in-network key-value cache implemented using P4. It is based on a paper orginally published at ACM SOSP ’17, the premier venue for systems research.

The emergence of P4 and programmable data planes enables new use cases, some of which go beyond traditional packet-processing to application-level functionality. This post presents NetCache, a next-generation cloud system built with P4 that shows how co-design of networks and distributed systems can lead to significant performance benefits.

NetCache is an in-network key-value cache that leverages the power and flexibility of programmable switches to cache query results and balance load for frequently-accessed items. Because switches are optimized for data input-output, they offer orders of magnitude better performance compared to storage servers, making them an ideal solution for load balancing and caching. While traditional caches usually require a high cache hit ratio (>90%) to absorb most queries, NetCache uses switches primarily for load-balancing, so it provides significant benefits even with a modest cache hit ratio (<50%). Specifically, NetCache provides high aggregate throughput and low latency, even under skewed and rapidly-changing workloads.

What is the problem?

Unfortunately, the skewed, dynamic nature of real-world workloads make it difficult to provide these guarantees in practice. Popular items are queried far more often than other items, leading to severe imbalances—some servers are over-utilized, other servers are under-utilized, throughput is reduced, and response times suffer due to long tail latencies.

Load balancing with small, fast caches. Caching is an effective technique for addressing load imbalance (Figure 1). Using a theoretical analysis, one can prove that a cache only needs to store O(N log N) items to balance the load for a hash-partitioned key-value cluster with N storage nodes, regardless of the number of key-value items. As O(N log N) is relatively small, hot items can be replicated to all cache nodes in order to avoid circular load balancing issues in the caching layer. To handle skewed workloads, the caching layer must provide an aggregate throughput comparable to the storage layer. Given M caching nodes with per-node throughput T’, we need M >= N * T / T’. If T’ is close to T, then M would be close to N, which implies that we would need to build a caching layer with a similar number of nodes as the storage layer. This has (i) high cost, as it uses too many caching nodes, and (ii) high overhead, as M nodes must be modified for each cache update. Therefore, it requires T’ » T—i.e., orders of magnitude difference—to build a cost-effective, low-overhead caching layer. 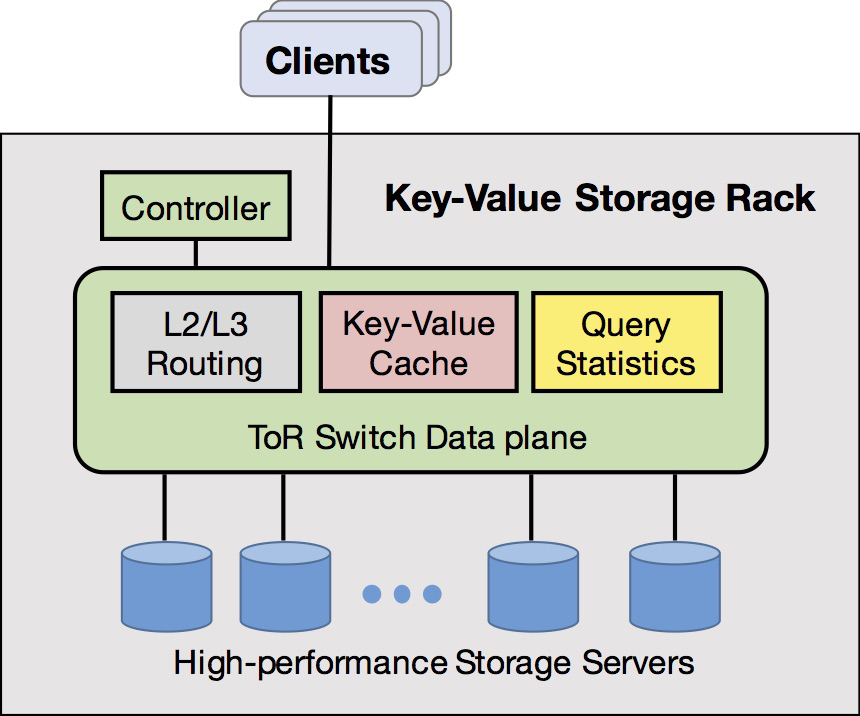 Switch. The switch is the core component of NetCache. It is responsible for implementing on-path caching for key-value items and routing packets using standard L2/L3 protocols. We reserve an L4 port to distinguish NetCache packets (Figure 2) from other packets. Only NetCache packets are processed by the NetCache modules in the switch, which makes NetCache fully compatible with other protocols and functions.

Key-value cache. The key-value cache module stores the most frequently-accessed items. Read queries are handled directly by the switch while write queries are forwarded to the storage servers. Cache coherence is guaranteed with a light-weight write-through mechanism. We leverage match-action tables and register arrays to index, store, and serve key-value items.

Query statistics. The query statistics module provides key-access statistics to the controller for cache update. This is critical for enabling NetCache to handle dynamic workloads where the popularity of each key changes over time. It contains (i) per-key counters for the cached items and (ii) a heavy hitter (HH) detector to identify hot keys that are not present in the cache. The HH detector uses a Count-Min sketch to report HHs and a Bloom filter to remove duplicate HH reports, both of which are space-efficient data structures and can be implemented in programmable switches with minimal hardware resources.

Controller. The controller is responsible for updating the cache with hot items. It receives HH reports from the switch data plane, and compares them with per-key counters of the items already in the cache. It then decides which items to insert into the cache and which ones to evict. Note that the NetCache controller is different from the network controller in Software-Defined Networking (SDN): the NetCache controller does not manage network protocols or distributed routing state. The network operator uses existing mechanisms (e.g., an SDN controller or a traditional distributed routing protocol) to manage routing tables and other network functions. The NetCache controller does not interfere with these existing systems and is only responsible for managing its own state—i.e., the key-value cache and the query statistics in the switch data plane. It can reside as a process in the switch OS or on a remote server as it communicates with the switch ASIC through a driver in the switch OS. All queries are handled by the switch and storage servers, so the controller only handles cache updates and thus is not a performance bottleneck.

Clients. NetCache provides a client library that applications can use to access the key-value store. The library provides an interface similar to existing key-value stores such as Memcached and Redis—i.e., Get, Put, and Delete. It translates API calls to NetCache query packets and also generates replies for applications.

How well does NetCache perform? 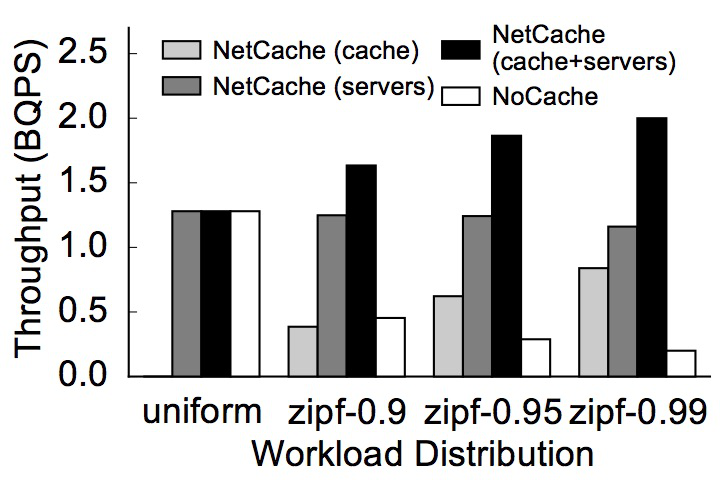 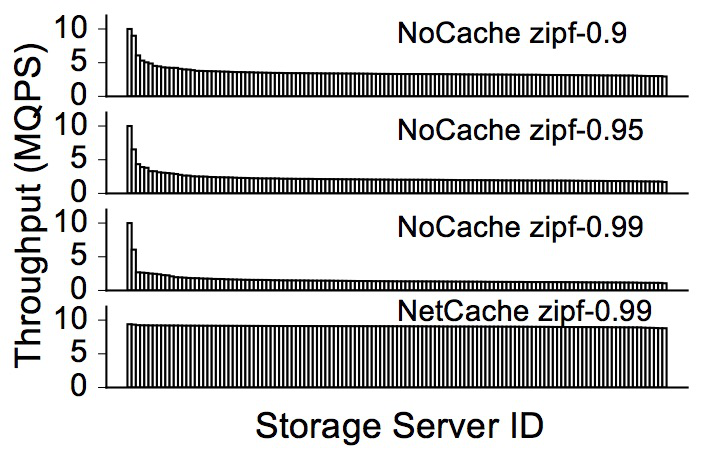 We have implemented a NetCache prototype with one 6.5 Tbps Barefoot Tofino switch and multiple commodity servers. Figure 3 shows the system throughput with read-only queries and 10,000 items in the cache under several different workloads. In the experiment, we use one server as a client to generate queries, and use two servers to emulate a rack of 128 key-value storage servers. We compare NetCache with NoCache which does not have an in-network cache. In addition, we also show the portion of the throughput that is provided by NetCache and the storage servers respectively. We observe that NoCache performs poorly when the workload is skewed. Specifically, with Zipf 0.95 (0.99) distribution, the NoCache throughput drops down to only 22.5% (15.6%), compared to the throughput under the uniform workload. By introducing only a small cache, NetCache effectively reduces the load imbalances and thus improves the throughput. Figure 4 shows the throughput breakdown on the individual storage servers when caching is disabled (top three) and enabled (bottom). NetCache uses the switch cache to absorb queries on the hottest items and effectively balances the load on the storage servers. Overall, NetCache improves the throughput by 3.6X, 6.5X, and 10X over NoCache, under Zipf 0.9, 0.95 and 0.99, respectively.

In summary, NetCache is a new key-value store design that provides billions of queries per second throughput with bounded latency even under highly-skewed and rapidly-changing workloads. To do this, NetCache leverages new-generation programmable switches to build an on-path caching layer to effectively balance the load for the storage layer and guarantees cache coherence with minimal overhead. We believe that NetCache is only one example of ultra-high performance distributed systems enabled by high-speed programmable switches. You can learn more technical details about NetCache in the paper published at ACM SOSP ’17.

Editor’s note: This guest post by Xin Jin (The Johns Hopkins University) describes a next-generation in-network key-value cache implemented using P4. It is based on a paper orginally published at