ONF Ambassador About the author 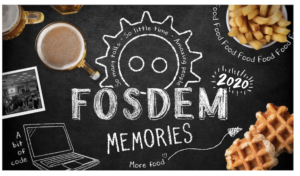 In February 2020, Open Networking Foundation (ONF) Ambassador Laszlo Papp participated in FOSDEM 2020 in Brussels, Belgium. FOSDEM is a two-day eventorganised by volunteers to promote the widespread use of free and open source software. The event was started in 2000 and is widely recognised as the best such conference in Europe. It has been held annually in February since then, with growing numbers of visitors, talks, and tracks. Over eight thousand participants from different backgrounds attended the event this year.

The participants typically include free and open source software engineers at all levels, ranging from students at small universities to experienced and recognised professionals at reputable companies. The program at FOSDEM is built around 40-50 thematic tracks. Each track is hosted in a developer room. The capacity of the developer rooms varies in size from about 50 to 500 participants, while main tracks can host up to 1,500 participants. Over a few hundred participants attended the Software Defined Networking developer room on Saturday. The session covered a wide-range of network-related topics such as Cloud Computing, Cloud Native, DevOps, Security, the network stack in the Linux kernel, and Software Defined Networking. Over a thousand participants attended the Go developer room on Sunday. This session covered a wide-range of Go-related topics such as State of Go, Functional Programming, Advanced debugging techniques of Go code, Deep Learning, Go in resource-constrained environments, and lighting talks.

If we were to mention a couple of buzzwords after listening to the talks, we would compile the following list: VPP (Vector Packet Processing), DPDK (Data Plane Development Kit), NFV (Network Functions Virtualization), CNF (Cloud Native Functions), Edge, Kubernetes, and OpenStack. DPDK seems to have still received the most attention in the developer room.

Laszlo attended these two developer rooms with the aim of engaging with attendees and speakers, both to maintain old relationships as well as building new ones. He represented ONF when relevant topics came up in discussions, and he learned more about the Go language that enables him to better contribute to the µONOS project. 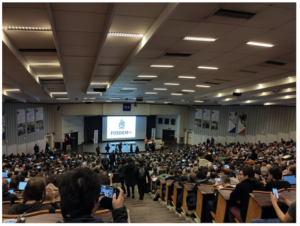 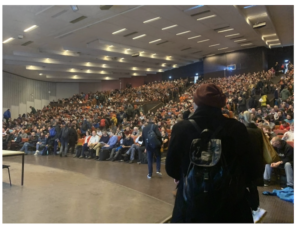 ONF Ambassador
ONF Ambassadors are a group of people who are passionate and knowledgeable about ONF Projects, Reference Designs, Exemplar Platforms, or any other initiative, and who want to promote these to build local communities in their part of the world. Ambassadors actively participate in events to present their contributions and promote open source projects and solutions. For more information about the ONF Ambassador Program and for a list of Ambassadors, please visit Ambassador Program website ambassadors.opennetworking.org. If you feel that this is something you would like to do and would like to join the program, please apply here.

The initial thrust of software-defined networking was to allow software to affect what the network does, primarily in order to increase the rate of innovation. It was not really about how to operat