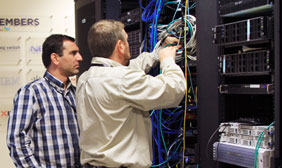 Today's customers are looking for deployment-ready solutions for their networking environments and future looking for compatibility with the increasing number of SDN solutions built on the OpenFlow® specification. An ONF OpenFlow® Conformance certification is the highest level of assurance available in the market today to validate product conformance with a specific version of the OpenFlow® specification. All Conformance testing is performed by independent, accredited testing labs around the world, providing both impartial validation and ONF endorsement. Recently, ONF announced the expansion of the Conformance Testing program to include testing for non-ONF members, to enable broader adoption of Open SDN.

Certificate of Conformance and Logo usage:

Vendors that earn an ONF Certificate of Conformance gain the right to use the globally-recognized ONF OpenFlow® Conformant logo for their compliant products and website. The logo identifies the version of the OpenFlow® specification to which the product conforms. It can be used on physical products, software documentation, websites, and marketing material, as described in the ONF trademark, logo guidelines, and conformant logo guidelines. Vendors that earn Certificates of Conformance are also listed on the ONF website, providing an additional competitive advantage.

OpenFlow Switch v1.3.4
The Basic Single Table Conformance Test Profile is primarily based upon features listed as mandatory in the Openflow Switch Specification 1.3.4.

OpenFlow Switch v1.0
ONF offers OpenFlow® Switch Specification 1.0.1 Certificates of Conformance for Full Conformance, Layer 3 Conformance, and Layer 2 Conformance. Vendors have three certification options because support of some applications does not require the use of all 12 match fields described in the OpenFlow® Switch Specification 1.0.0 (Errata 1.0.1). To allow support of "specialized" devices designed to support only a specific subset of functions, three profiles were defined to specify required match fields to support the most common applications.

Please refer to the OpenFlow® Test Specification for more detailed information on test cases and profile requirements. Specific test requirements and costs for each certificate are available from the test lab.

ONF has selected Beijing Internet Institute (BII) as its first international certified conformance testing lab in Asia. BII is an independent, private company with a keen interest in promoting the development of the Next Generation Internet: IPv6 and SDN, focusing on Technology Research, Promotion, Testing & Certification to support a secure, stable, extensible and interoperable Internet. The certified testing lab establishes conformance testing in China and provides SDN technical testing services to global clients. BII’s testing lab in China evaluates vendors’ networking products for interoperability, conformance, function, and performance. The company will expand its evaluation services by partnering with ONF to test SDN and OpenFlow® conformance. The lab will also offer organizations the opportunity to receive OpenFlow® certification of their products.

ETRI has a network testing lab dedicated to testing networking products, technologies and solutions through industry collaboration. The network testing lab, accredited by Korea Laboratory Accreditation Scheme, is focused on research and development of technology, standards and test methods for network devices.

ETRI is a global ICT research institute, founded in 1976, it has been making immense effort to provide Korea a remarkable growth in the field of ICT industry. ETRI delivers Korea as one of the top ICT nations in the World, by increasingly developing world’s first and best technologies.

ONF has selected Indiana Center for Network Translational Research and Education (InCNTRE) as the first independent lab approved for ONF OpenFlow® Conformance Testing. As part of Indiana University (IU), InCNTRE is a hub of education, research, training, and development for the adoption of the OpenFlow® specification and other standards-based Software-Defined Networking (SDN) technologies. Through initiatives such as the SDN Interoperability Lab, the Summer of Networking internship program, and networking research collaborations, InCNTRE has developed resources that will accelerate the next generation of networking. InCNTRE has long been a part of the SDN ecosystem, and is delighted to be accepted as ONF’s first authorized OpenFlow® Conformance Testing program.